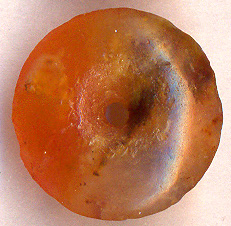 The site, ancientbead.com contains some helpful information about the bead production process in ancient times, and excellent examples of ancient beads.

Valuable extracts from the site to help understand the technological processes involved are as follows:

In the early stages of bead making, it was a difficult thing to produce a bead.
Hence a beautiful bead was a rare thing and most probably reserved for the upper segments of society.
But with the inventions of new bead producing technologies like the polishing bag and the diamond drill
stone beads became more common and with this commonness they started a journey from the social pyramid top
to the buttom. They became a part of the middle class culture and finally landed in poorest part of society.
Today the tradition of stone bead making and
the digging for raw agate is kept alive by the Bheel’s (or Bhil’s)
with the simplest tools. The Bheel’s are India’s largest tribal community, by Gandhi called the Adivasi, the ‘pure ones’.

The Bheel’s are the aboriginals of India. They were there before the Vedic, Arian settlement.
They were the original Indus Valley people. One could say that the Bheel’s simply went on a social deroute
together with their beads: from the greatness of one of the most mysterious and affluent ancient cultures
in the world to being casteless, outcast, despised by their new Vedic rulers.
As mentioned elsewhere on ancientbead.com, there probably is a link between the Buddhist
love for stone beads down to the Indus love for the same art

The collecting and mining of the stones

As previously mentioned the Bheel’s are still ‘hunting’ for stones in the principal mines of Gujarat, India.
These mining places have been there since the Indus Valley days! One of the methods for obtaining
these stones was searching for them in eroding cliffs. Another was to put a fire close to a cliff and then
throw water on the heated cliff. The sudden cooling would then make the heated surface crack apart.
The best collected agate pieces were then put in the sun for month to dry out.
After this drying had been completed, some of the stones
would be chosen for a special heat treatment.

The Shaping of Beads:

Raw stones are chipped in shape with hammers made of water buffalo horns
in a hammering process called inverse, indirect percussion.  An iron stake or another stake of hard material is
placed in the ground at an angle of aprox. 45 degrees. The artisan sits on the ground with one knee
controlling the stake. In the left hand he holds the stone and with the right he is softly striking the bead so
that it is colliding with the stake. In this way the bead maker can chip off small flakes without braking the stone itself.

Making a hole through the bead:

Holes were drilled from both sides of the bead to avoid it cracking. This process is the most difficult in the process of making and preparing a bead for jewellery. Neolithic beads were produced with the simplest tools! ‘Pecking’ tools were created and used. Using such basic, crude tools as these, it was clearly easier to produce beeds that were relatively flat rather than long. 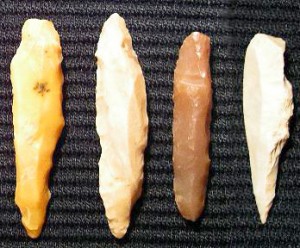 Normally. a big hole denotes a very old bead. In ancient days, arcane drilling technology made it difficult to make small holes and the bead strings, made out of natural materials, were made thicker so that they would not break easily. So specialist in ancient beads are, to some extent, from the nature of the hole alone, are able to distinguish an ancient bead from that which is modern, fake – ‘simulacra’.

Greater India was the melting pot of
a huge variety of different cultures and societies which had been coexisting side by side for millennia.
All of these cultures used beads, but their bead making technology was not identical. Some cultures like the Harappan
produced far more intricate beads than many of the societies that followed.

A drill, such as a bow drill, would be needed to make a perfectly round hole. 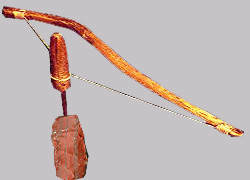 With the invention of the bow drill, tabular beads disappeared and longer beads, requiring longer holes, became all the rage. Longer, slender tubular beads appeared. The bow drill was invented as early as 4000 BC, appearing as a drilling method for beads in the Copper bronze age,
in West Asia and the Indus Valley. (Says the site) Around 600 BC the diamond drill was invented in India and a hole could then be completed 200 times faster. Unfortunately, the site here at present did not have an example to show what a ‘diamond’ drill at this time would have looked like.

Before 800 AD the polishing process was done by hand, grinding it on silstone or quartzite and finishing the polishing on a wooden surface. Agate dust was used a s a fine form of abrasive. The whole process was very time consuming. 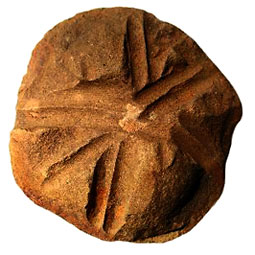 Around 800 AD the smart Indians invented a new way of polishing beads.
Before that time every bead was shaped through hand rubbing. Now the bead makers started
to polish the beads in several numbers by putting them into a goatskin bag with water and agate
or jasper dust. Two men then rolled the bag between them on the floor for several days.

The time consuming process of hand rubbing the beads had one advantage
that was lost with the bag polishing: The hand shaped beads can display edges
and sharp designs

Indus Valley people invented a process of heat treatment that enabled the transformation of agate into carnelian. The Indian Ratanpur agates having a high iron oxide content and it was the rusty colouring that turned the grey agate reddish through heating. To enhance the color the agate is then put in the sun several times, often over several month to remove the moisture in the stone. They would then be placed in clay pots and, using animal dung, set on fire in walled enclosures. In this way, it would have been heated to around 340 degrees centigrade.