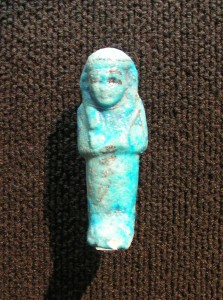 Whilst, as the name Egyptian Faience indicates its wide spread in Egypt, it was also found and manufactured in the rest of the Near East and the Mediterranean.Egyptian faience should not be confused with the earthenware of the Faenze region of Italy, now more commonly known as ‘majolica’.

To the ancient Egyptians, faience was known as “tjehnet” which meant brilliant or dazzling and it was thought to shine with light as the symbol of life, rebirth and immortality. This man made material was probably intended to resemble precious stones like turquoise and lapis lazuli.

Faience objects were very common in ancient Egypt from the Predynastic times until the late Arab period in the fourteenth century AD. Faience was used to produce a wide range of artefacts from beads and small objects to vessels, tiles and architectural elements.

For further detail and the source article – click here