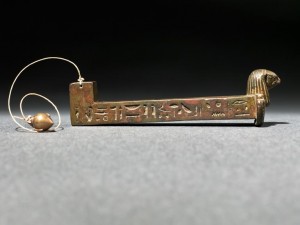 A merkhet is a device which was used in Ancient Egypt for the purpose of telling time at night. Merkhets were extremely accurate, and could be used to make astronomical observations in addition to to keeping time. Several extant merkhets are on display at museums with collections of Egyptian artifacts, and numerous works of Egyptian art depict the use of merkhets. It has been suggested that these instruments were probably used in the construction of temples and tombs to align the structures in particular ways.

The device is fairly simple. A merkhet includes a straight bar attached to a plumb line, a weighted line which can be used to establish a straight vertical line to the ground. To use the merkhet, the device was aligned with the North star, and a second merkhet would be used to establish a North-south meridian. This line could be used to align a structure, or as a reference point to track the movement of stars in the sky.

By making note of when particular stars crossed the meridian, the user could determine the time. Astronomers also used merkhets to map the skies and to make observations, often with the assistance of a bay, a specially designed tool used for sighting. During the day, when the stars are not visible, a sundial would have been used to mark the passing of the hours.

via What is a Merkhet? (with picture).