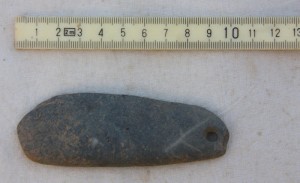 A pendant some 25,000 years old has been found in the Irikaitz dig in northern Spain’s Basque region by archaeologists from the Sociedad Aranzadi.

The piece, an oblong gray smooth stone some 10 centimeters (4 inches) in length, is perforated at one end and apparently was hung from a thong or cord around a person’s neck, according to the director of the excavation, Alvaro Arrizabalaga, who added that the other end of the stone was used as a tool to retouch the edges of tools made from flint, like arrows or scrapers.

The object comes from the Cromagnon epoch.

Arrizabalaga said that the pendant is older than other such items found so far in the Praileaitz cave which are estimated to be some 15,000 years old.