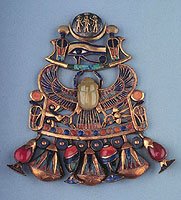 Necklace from tomb of Tutankhamun includes a scarab beetle design using desert yellow/green glass found to be Libyan Desert Glass, or Silica Glass. (Not Chalcedony as Howard Carter had thought.)

It’s 98% Silicon and 28 million years old.The geological cause that formed the glass is uncertain, one idea being an extraterrestrial explosion from  rubble falling into the Earth’s atmosphere and causing a thermal shockwave, similar to that which occurred in Tunguska, melting the sedimentary sandstone rocks of that age and forming the gem like glass.