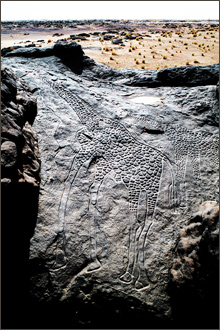 World’s largest rock art petroglyph carving in Africa – In the heart of the Sahara lies the Tenere Desert. ‘One of the finest examples of ancient rock art in the world – two life-size giraffe carved in stone.

Tenere’, literally translated as ‘where there is nothing’, is a barren desert landscape stretching for thousands of miles, but this literal translation belies its ancient significance – for over two millenia, the Tuareg operated the trans-Saharan caravan trade route connecting the great cities on the southern edge of the Sahara via five desert trade routes to the northern coast of Africa.

And before the Tuareg? Life in the region now known as the Sahara has evolved for millennia, in varying forms. One particular piece of evidence of this age-old occupation can be found at the pinnacle of a lonely rocky outcrop. Here, where the desert meets the slopes of the Air Mountains, lies Dabous, home to one of the finest examples of ancient rock art in the world – two life-size giraffe carved in stone. They were first recorded as recently as 1987 by Christian Dupuy. A subsequent field trip organised by David Coulson of the Trust for African Rock Art, brought the attention of archaeologist Dr Jean Clottes, who was startled by their significance, due to the size, beauty and technique.