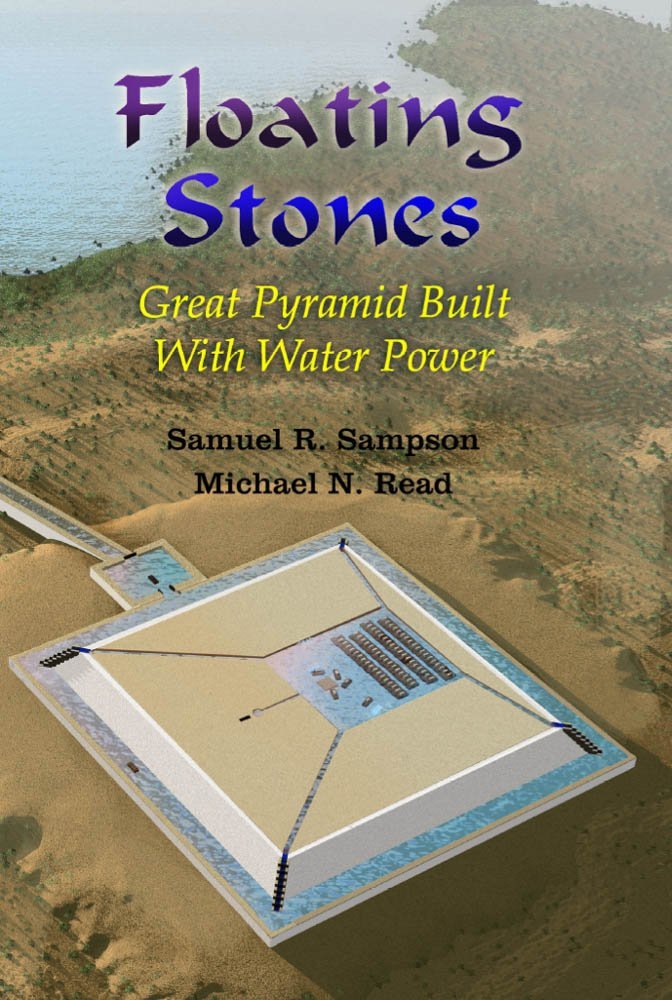 The book, written by Samuel Sampson and Michael Read, describes the conflict between between the acknowledged magnificence of the Great Pyramid, how giant monoliths were lifted to the upper levels where the ‘Queen’s Chamber, Grand Gallery and ‘King’s Chamber’ are situated for example, and the primitive and labour intensive methods of construction. 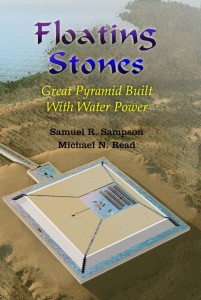 Their idea, which I find difficult to accept, not fully anyhow, is that the ‘Causeway’ is the remnants of what was a series of water locks that allowed stone-laden barges to float up directly from the River Nile to the pyramid and into a ‘moat-like’ body of water, enclosed like a pond, contained by a wall constructed around the pyramid. The build of the pyramid was done in two phases. In the first phase, all the monoliths required for the higher levels were floated in along with the stones needed for the first seven courses. Them in the second phase, all the remaining stones were raised by locks, which they describe them as lock boxes, on the side of the pyramid all the way up to the top where the pyramidian was placed. According to Samuel Sampson and Michael Read, there was no need for slaves, ramps, levers, pulleys or pumps.

In support of their ideas, they refer to the seven boat pits located around the Great Pyramid, as though these were strategic in the building process. The pits are carved into the limestone rock but although five of them are boat shaped, they contain, or never contained any boats. Curiously, the other two pits which do contain boats are not boat shaped but are rectangular in shape. They were covered with huge limestone lintel blocks sealing them in, keeping them airtight. One of these is yet to be excavated while the other, found disassembled, has been dug up, reassembled and placed on display as the Pharaoh’s funerary boat.

It’s amazing to think of the sheer scale of industry at such a time in ancient history that pyramid building and general stonemasony engendered. Asside from the stonemasons and labourers themselves, there were the workman providing shelter for the encampment, foundry workers and tool makers who maintained chisels and other tools, scribes under the direction of a vizier to keep track of orders, deliveries, schedules and payments to ensure work on site was organised and monitored. The list of people involved, and the skills base required, must have would be immense.

Key to the author’s ideas is the use of an artesian well whereby water flowing from it would have been used to power the system that floated the large stones up to the pyramid’s construction site. In their view, the grotto area beneath the Great Pyramid was the location of the flowing artesian well. They think this had been in existence long before the pyramid was built. They cite how the ‘Well Shaft’, though named by experts or Egyptologists, was not considered by them as a well shaft as such but saw it as an a means created for escape by the pyramid workers when leaving the ‘King’s chamber to avoid being interned by portcullis stones lowered into the ascending corridor. They mention that a red granite block at the edge of the deep hole in the grotto has a hole drilled in it. There are other red granite plugs used to block corridors apparently, but they do not have this hole. The authors believe this was a hole used to control the flow of water.

The author’s note that the subterranean chamber, to which the descending corridor leads, is one hundred feet below the Giza plateau and is the first ever to have be hewn out of solid bedrock in the history of pyramid building. Because of the narrowness of the descending passage, the chamber was not thought to have been the location for a sarcophagus.

For the authors, the valley temple was the first of a series of water locks that allowed stones to be offloaded from barges to smaller barges that conveyed the stones up the causeway lock system to the ‘Mortuary Temple’ which they think was an upper lock. From there they entered the enclosure wall and into the Enclosure Pond. The idea that these temples were in fact part of a lock system initially that assisted the transport of the stones and were subsequently used for ritual purposes seems to have plausibility.

It’s interesting to consider the differences between ideas of Egyptologists and the authors about the enclosure wall that surrounded the pyramid. Egyptologists see it as a wall that provided security for the monument whereas the authors calculate that it was a retaining wall filled with water used to supply the lock system. The height of the wall was thought to be about 26 feet and its distance from the pyramid, 33 feet. (Ideas about the height of the wall are based, apparently, on the width of the remnants of the footings – and so a guess.)

The author’s argue that other causeways at other pyramids, which are better preserved, such as that of Khafre and the Unas pyramid, appear to have been channels in a water lock system, and refer to these as evidence for their ideas of the Great Pyramid.