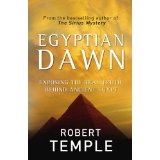 In his book, ‘Egyptian Dawn’, Robert Temple explains his idea that the layout for the pyramids on the Giza plateau was set out and initiated by their requirement to have a shadow produced at noon on the winter solstice that would be 648 feet in length. He cites Moses B. Cotsworth as the first to realise this in the 19th century. Temple goes on to say that to obtain a shadow of this length, at that latitude, would require the building of a stable structure such as the Great Pyramid. Where this shadow ended marked the  perimeter of a square boundary within which the other pyramids would also fit. He describes his observation of several geometric alignments that occur within the square in relation to the other pyramids and their environs. These seems quite elaborate, particularly when he claims to have defined the shape of the All Seeing eye within the square also. Apparently this was not meant to be acknowledged by any other than the special priests and those who were party to encoding it into the layout plan for the plateau. Coverage of these ideas is perhaps unfortunate for Temple and his book because it is possible, I would think, that the reader may not find this ideas fully convincing as I for one didn’t, particularly the reference to the eye positioned within the area for which diagrams are shown and intended to support the idea. As has often been commented before when writers start to make their claim that they see secret geometric designs within the layout of buildings and towns etc., it is felt that if you draw enough lines you will see or create the connections you want to see. And why would they need to be secret? That idea of their being kept a secret, to be unknown to the laymen, seems unnecessary. It’s probable that the lay of the day may not have understood the apparent logic that would have informed the designs and may not have had a need to care anyhow as it was not their profession to design and perform the work of an architect but had their own specialism to tend to. Contrary to this, when pointing out the layout of  the parts of the town of Bath in England, and the city of Washington, for example,  plans in part there do seem convincing in having incorporated freemasonry ideas which has taken much of its symbolism from practices and appreciation of ancient craft.

I say unfortunate for Temple because if readers do not find these ideas convincing at the start of the book he may not carry them forward to many of his other ideas and comments within the book that would seem very sound and authoritative. He points out that the generally accepted dates for the building of the pyramids at Giza are incorrect. They are older.  Also they should not be attributed to the regularly stated Pharaonic builders such as Khufu, Khafre and Menkaure who are generally said to have been related to each other as grandfather, father and son. Temple makes the point well that this chronology has become so widely repeated in published works that its acceptance is difficult to overturn.

On page 12, Temple refers to the work of the late Alessandra Nibbi who in her published journal at Oxford, ‘ Discussions in Egyptology’, stated discoveries as follows – “that cedar of Lebanon did not come from Lebanon, that papyrus only grows in certain specific conditions,……that in very distant times there was a river route to Sinai.” Temple adds awareness that Paul was not on the road to Damascus but the Damascus that was a town in Judea, That Jesus was not from Nazareth but was a Nazarene – a Jewish sect apposed to the Sadducees named after the Aramaic word nazar meaning ‘truth’. (There was no town of Nazareth at the time of Jesus.). There was a also a portion of Cairo known as Babylon which never had any connection to the Babylonians.

Temple writes (page 25) that John Taylor appears to be the first person to insist that pi was incorporated in the dimensions of the Great Pyramid in a book published in 1829 and that it was his discovery that the base was equal to the height times 2 pi.

The pyramid of Khafre  casts a winter solstice shadow upon the south face of the pyramid of Khufu at sunset and on this days also occurs the longest noon shadow of the Great Pyramid. It is noticed that the angle of this shadow is the same as those of the ascending and descending passages inside the Great Pyramid which is the ‘golden angle’ or ‘golden slope’ first discovered by Henry Crichton Agnew in the 1830s and later confirmed by Sir Flinders Petrie.

The ‘Osiris Shaft’ at Giza was apparently first discovered by Giambattista Caviglia in 1816 (or 1817) according to the Burton manuscripts in the British Library. The shaft has three levels, the lowest fills with water and is named the ‘Tomb of Osiris’, originally containing the sarcophagus which is still there set on an ‘island’ surrounded by water with  four pillars which have been demolished and removed. In level two, several  sarcophagus have been removed but the two large on remains. One of these Temple and his colleague were able to establish through scientific test of a sample was made of Dacite, an igneous rock composed of Feldspar and Quartz. Deposits of this rock are only available from from hundreds of  miles away in the Far Eastern Desert and the Sinai with no conventional route for the transportation of large stones. The far Eastern Desert is beside the Red Sea, not the Nile. Extracting a sufficiently large piece of Dacite from the veins on which it occurs would be a considerable problem, not least because large enough veins of the material large are very rare to find. Temple writes, (page 62) It seems that Dacite is not a common Egyptian rock by any means , and it was never used for any of the tens of thousands of small stone vessels roughly contemporary with the sarcophagus. In fact, there appears to be no known occurrence of its use in any ancient Egyptian artefact of construction, other than for carving this enormous sarcophagus in the Osiris shaft. Using the technique for dating by his colleague Ioannis, the date obtained 2800BC, plus or minus 550 years, making it potentially a lot older that then well-known, though probably flawed chronology, of the fourth dynasty pharaoh Khufu. by as much as a millennium. Their dating result for the sarcophagus in level three turned out to be younger – 1970BC, plus or minus 400 years. They conclude that the Osiris shaft was in existence before the causeway of Khafre stated as being of the fourth dynasty.

Temple’s book suggests that there were two civilisations in ancient Egypt at the same time, one in the north and one in the south, the more technological being in the north that was possibly guarded from spreading south and out of royal control at Memphis. It then suggests that the building of the Great Pyramid, for example, was not a step forward in the evolution of building ability, but that the Step Pyramid pyramid was an attempt by its architect Imhotep to emulate the pyramids of Giza. (page 110)

There appears to be a need to improve the way in which research upon ancient Egypt and its monuments can be conducted. At present it always seems from any text about the matter that one person in articular has enormous, if not full control over this – Zahi Hawass. It is commendable and understandable that he would like all artefacts to remain in Egypt but has apparently insisted, as the book describes, that also much of the research should be conducted in Egypt even where, in the case of some technological know how, Egypt does not have the means or expertise to carry it out. temple describes the process that occurs when trying to obtain permission to conduct any research at the monuments, including that which is no intrusive or destructive. “In order to carry out archeology work in Egypt , it is necessary to have permission from six separate entities: the army, the navy, the air force, the antiquities police, the ordinary police and the secret police. They all run checks on you one by one. When the finishes with you and stamps your form as cleared, the form is carried by hand to the navy, where it sits in a tray, and when the navy finishes with you and stamps your form as cleared , the form is carried by hand to the air, where it sits and so on. The authorities are all in different buildings. It is estimated that each separate ‘tray time’ is an absolute of two weeks , even for familiar faces attached to long-established foreign institutes.” However, Hawass granted permission to Temple to explore the Osiris Shaft because he had a personal interest in it and because he could. 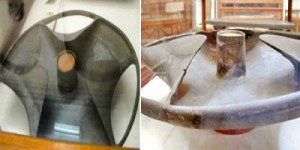 Temple refers to the schist bowls from the tombs of the first dynasty and explains his view they were cast, not carved or ground, from liquid stone that was then poured into moulds made from clay. The same method was also apparently used to form statues made of Diorite and other hard stone materials. He names Joseph Davidovits as the person who rediscovered this technology who named it ‘ ‘geopolymeric’ chemistry. “The Egyptians used weathered rock articles, which could easily be disaggregated, formed a very fine aggregate, then added the necessary catalyst with water, and this formed a kind of   polymeric concrete that sets hard. It is impossible to tell the difference between carved stone and cast stone with any chemical analysis or by X-ray diffraction analysis, as the results are identical…..Joseph has also cast some giant ‘pyramid blocks’ of cast limestone, one weighing four tons and one weighing three.” He and Davidovits believe the main Giza pyramids were constructed out of cast limestone, not cut limestone. Temple points to the site www.geoplymer.org for an explanation of the subject. Imhotep it appears had an interest in acquiring 40,000 of these and placing them beneath the Step Pyramid.

Temple makes the point in many times in the book that knowledge of  Ancient Egypt is in a mess with many experts disagreeing the who what where when of it and that so called experts of Egyptology  are not really so expert at all as they have very little interconnecting knowledge of other disciplines with which they state very ignorant notions of what really happened in ancient Egypt, by who, when and how.

In 1914 (page 274) the physical anthropologist Douglas Derry studied skulls at Saqqara and compared them with per-dynastic  skulls from the south  and discovered that they were so drastically different that they were actually a different race of people. Petrie called them the ‘Dynastic race’….”the the pyramid builders were a different race from the people whose descendants  they had hitherto been supposed to be…. The Predynastic people are seen to have narrow skills with a height measurement exceeding the breadth, a condition also in negroes. The reverse is the case of the ‘Dynastic Race’, who not only had broader skulls but the height of these skulls, while exceeding that in a Predynastic Race, is still less than the breadth……under no circumstances could we consider them to be of the same race.” So did the arrival of a different race change the whole cultural trend of the Nile valley some 5,000 years ago Temple asks?