Skip to content
Loading...
Latest news
Armenian Stonehenge: Incredible History of the 7,500-Year-old Observatory of Zorats Karer
Mysterious Megaliths of the Talaiotic People, Menorca
New Claims About The Great Pyramid – Do They Stand Up? Graham Hancock Website
Curious Stone:- Who Drilled The Holes In This Million Year Old Stone?
10 Controversial Archaeological Discoveries You Should Not Miss – Oddee
Ancient TechnologyArtifact & CultureCurious? 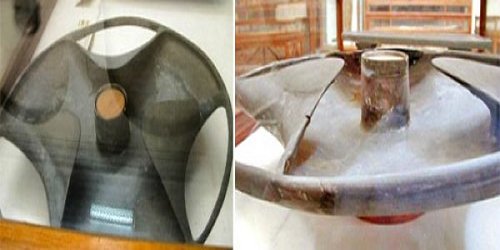 Robert Temple, in his book, ‘Egyptian Dawn’, refers to the schist bowls from the tombs of the first dynasty and explains his view that they were cast, not carved or ground, from liquid stone that was then poured into molds made from clay.

The same method was also apparently used to form statues made of Diorite and other hard stone materials. He names Joseph Davidovits as the person who rediscovered this technology who named it ‘ ‘geopolymeric’ chemistry. “The Egyptians used weathered rock articles, which could easily be disaggregated, formed a very fine aggregate, then added the necessary catalyst with water, and this formed a kind of   polymeric concrete that sets hard. It is impossible to tell the difference between carved stone and cast stone with any chemical analysis or by X-ray diffraction analysis, as the results are identical…..Joseph has also cast some giant ‘pyramid blocks’ of cast limestone, one weighing four tons and one weighing three.” He and Davidovits believe the main Giza pyramids were constructed out of cast limestone, not cut limestone. Temple points to the site www.geoplymer.org for an explanation of the subject. Imhotep it appears had an interest in acquiring 40,000 of these and placing them beneath the Step Pyramid.

Link: Notes on Quantum Gaze from the book ‘Egyptian Dawn’