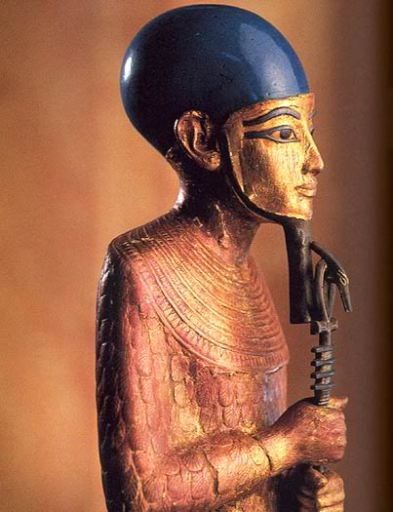 It’s difficult to read about ancient Egypt without encountering their various gods, and remembering which is which can get confusing. So here are some prominent ones, in simple summary, as an attempt to get to know them. 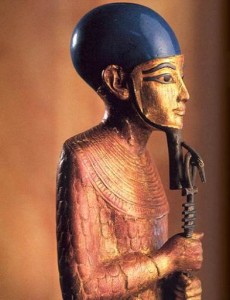 Ptah was the creator god who existed before anything else (bizarre!) according to Memphis, the capital of Egypt at the time. So he was the god of artists, craftsmen and masons. The blue skull may have something to do with a referenc 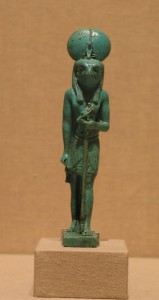 Re or Ra is the sun god. Somehow many other gods merged with him over time, particularly popular in Heliopolis. All life w

as created by him. As he travelled across the sky, Ra was in a morning solar boat called the Mandjet and in the evening a solar boat called called Mesektet when he would be in his ram-headed form. Some folk held the idea he was self-created while others thought Ptah must have created him. Ra was head of a group of nine gods, known as the Great Ennead. Ra was also the supreme judge of the dead. 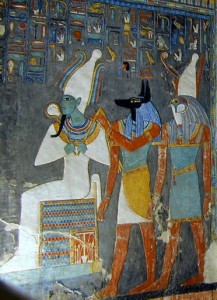 Osiris, was chief judge of the Underworld and god of resurrection, the flood and vegetation. He was an enlightened

king but killed by his jealous brother, Seth. His death and resurrection was celebrated each year in a miracle play at Abydos, his chief centre of worshipers to whom he represented hope of an eternal life. 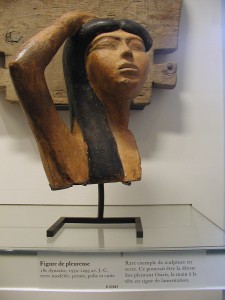 Husband of Osiris and mother of Horus. 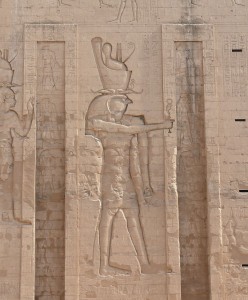 The son of Osiris and Isis and one of the nine gods of the ennead. By the magical power of Isis, Horus was born after Seth had murdered his father. He was raised to avenge hos father’s murder.

Horus was god of the sky, and the day. He was the devine protector of the king and people of Egypt.

Horus ruled over upper Egypt while Seth ruled the northern, until both upper and lower were united where Horus, who triumphed, is seen as entering a fusion with Seth.

At cult centres, partuclarly such as Behdet in the Delta, Hierakonpolis in Upper Egypt and at Edfu, he is depicted as a hawk-headed man.

“Horus was also said to be a god of war and hunting. Thus he became a symbol of majesty and power as well as the model of the pharaohs. The Pharaohs were said to be Horus in human form.” (Wikipedia) 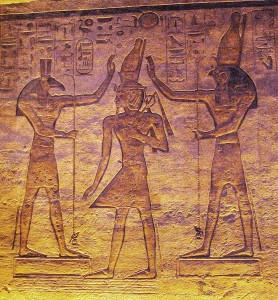 Seth was god of the lower Egypt and the dessert.

He was represented by an animal, which animal is not certain. He murdered Osiris, his father. He presided over thunder and violence, so Egyptians would admire his strength yet fear him in case he brought harm. 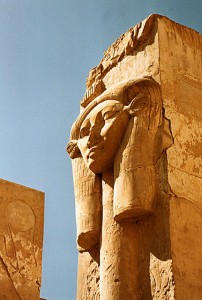 Hathor was depicted as a cow-headed woman, or a cow’s horn

s and ears. She was known as the Golden One, Lady of Love, Music and Intoxication, and her main cult centre was at Dendera.

She was a symbol of motherhood and fertility. She was the patron-goddess of unmarried women and protected women in childbirth.

She is wife of Horus with who she had  son, Hor-sma-tawy.

The Greeks identified her with Aphrodite, goddess of love. 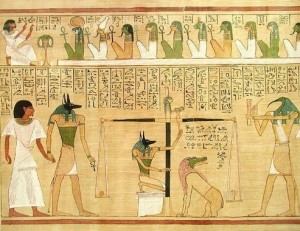 Anubis was presented as a jackal.

Anubis was the funerary god. It was Anubis who guided the dead on the paths of the Underworld, although Osiris later replaced him in this role. He carried out the first mummification of the body of Osiris. He attended “Weighing of the Heart” ceremony which determined whether a soul would be allowed to enter the realm of the dead 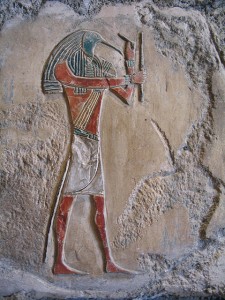 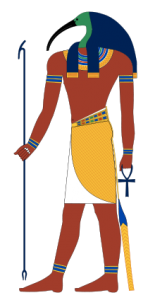 Thoth was ibis-headed man. God of the moon. He invented writing and the sciences. He was maintainer of the universe. scribe for the gods, recording verdicts of those tried in the Hall of Judgement and the length of reign of a king.

He was one of the deities who stood on Ra’s boat.

The book of Thoth was believed to have contained details of the wisdom of the world.

The greeks equated him with Hermes, their messenger of the gods. 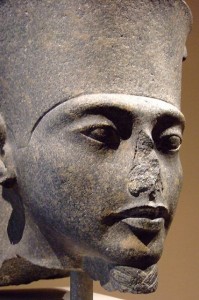 Amun, is usually depicted as a man wearing two tall plumes on his head, and holding a sceptre.

His sacred animals were the ram and the goose, both symbols of virility – which was one of Amun’s characteristics.

During the Middle Kingdom he was identified with the god Re, as Amen-Re, and Thebes (modern-day Luxor) became his cult-centre.

It is Amun who is is associated with the freeing Egyptian kings from rule. During the Eighteenth Dynasty he was more powerful than any other god.

The temple at Karnal is dedicated to him. 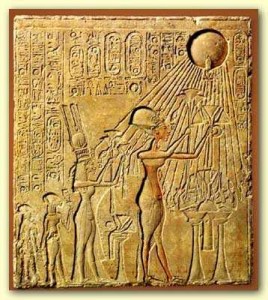 From BBC History –  “Aten was the sun-disk, the body in which the essence of the divine being was made visible. He rose to prominence in the reign of Amenhotep IV, who thought of himself as the embodiment of Aten. The king changed his name from Amenhotep (‘Amun-is-satisfied’) to Akhenaten (‘Glorified-Spirit-of-the-Aten’), and designed an iconography in which Aten was depicted as a sun-disk with rays ending in hands.

Akhenaten and his wife, Nefertiti, moved to a new city, Akhetaten (Horizon-of-Aten – Amarna), where a trinity consisting of Aten, Re and Akhenaten himself was worshipped. Atenism was exclusive to the royal family, with no appeal to ordinary Egyptians: when Akhenaten died, it too died.” 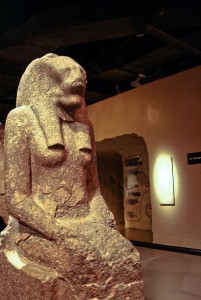 Bastet was the cat-goddess in the Eastern Delta. Depicted with a cats head, originally a wild cat then a domestic cat introduced into Egypt around 2100 BC.

She was a virgin goddess and yet had a son Mihos.

The Greeks identified her with Artemis, the divine huntress.