Stop Press – Latest News From The Excavations At Gunung Padang, The Mysterious Ancient Pyramid In Indonesia That Is Rewriting History by Graham Hancock – GrahamHancock.com articles 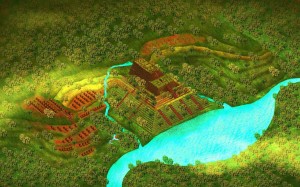 The archaeological establishment is scrambling to find some reason to reject and pour scorn on the extraordinary consequences of the excavations now taking place at Gunung Padang in Indonesia.

Since its first exploration by archaeologists in 1914 the site was thought to be a natural hill with 2500 year-old megalithic structures on top of it. But in 2010 geologist Dr Danny Hilman Natawidjaja (who earned his doctorate at Cal Tech) recognized this “hill” as a possible man-made pyramid and began to explore it using ground penetrating radar, seismic tomography, resistivity survey and other remote sensing techniques, as well as some direct excavations and deep core drilling.

The results were immediately intriguing (see this article I wrote in January for background: http://www.grahamhancock.com/forum/HancockG9-Mystery-Lost-Civilization.php) producing evidence of deeply buried man-made chambers and yielding carbon dates going back as far as 26,000 years. This was the last Ice Age when our ancestors are supposed (according to the orthodox archaeological model) to be have been nothing more than primitive hunter gatherers incapable of large-scale construction and engineering feats. Was it possible that geologist Natawidjaja was unearthing the proof of a lost advanced civilization of prehistoric antiquity? Such ideas are heresy to mainstream archaeologists and sure enough the archaeological establishment in Indonesia banded together against Dr Natawidjaja and his team, lobbied the political authorities, agitated locally and succeeded in slowing down, though not completely stopping, the further exploration of Gunung Padang.

Dr Natawidjaja fought back, doing some high-level lobbying of his own, taking the matter to the President of Indonesia himself. There were further delays to do with elections in Indonesia but just a couple of months ago, in mid-August 2014, the final obstacles were lifted and Dr Natawidjaja and his team moved back onto the Gunung Padang site with full approval to go ahead with their work, including permission to excavate the concealed chambers.

For more of the article, see link below:

via Stop Press – Latest News From The Excavations At Gunung Padang, The Mysterious Ancient Pyramid In Indonesia That Is Rewriting History by Graham Hancock – GrahamHancock.com articles.