Skip to content
Loading...
Latest news
Armenian Stonehenge: Incredible History of the 7,500-Year-old Observatory of Zorats Karer
Mysterious Megaliths of the Talaiotic People, Menorca
New Claims About The Great Pyramid – Do They Stand Up? Graham Hancock Website
Curious Stone:- Who Drilled The Holes In This Million Year Old Stone?
10 Controversial Archaeological Discoveries You Should Not Miss – Oddee
Ancient HistoryBook/Page Notes 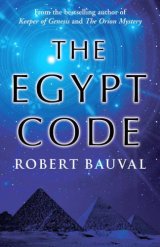 In his book, ‘The Egypt Code’, Robert Bauval refers to the Serdab located outside the north face of Djoser’s step pyramid at Saqqara. I hadn’t come across a Serdab before. This one was discovered as recently as 1925 when rubble was cleared. They were known to be situated with earlier Mastaba building but this one at Saqqara is unique for its evidently determined and deliberate incline which Bauval states as 16 degrees. In side was to be found a statue of the pharaoh Djoser, now replaced with a replica, whose gaze was through two peep holes on the north wall. Bauval calculates that the view was orientated 4 degrees and 35 minutes east of due north toward the star Al Kaid in the Big Dipper (in Ursa major). This star marked the rising in the East of the Star, Sirius.

Just the fact alone that the ancient Egyptians would build such a  cabin, at such an angle for a deliberate purpose would imply much about how advanced they were. The astronomical alignment and complex belief system raises further the level of sophistication. 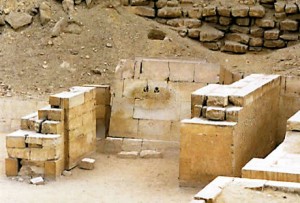