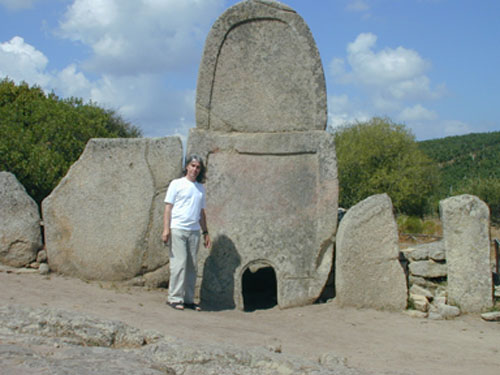 The Tombs of Giants, so called because of their gigantic dimensions, are another typical element of Sardinia’s megalithic period. Usually the frontal part of their structure is delimited by some sort of semicircle (exedra), almost as to symbolize a bull’s horns. Viewed from above the shape of the Tombs of Giants brings to mind that of an uterus or a woman in labour. This interpretation would confirm how closely connected life and death were for nuraghic people and how their megalithism was linked to the cult of fecundation. 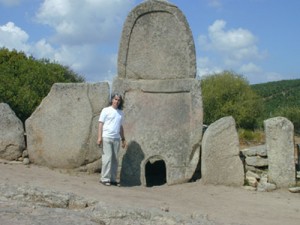 In the middle of these tombs’ exedra there is an enormous granite stele, on the base of which is an opening that leads to the part that was probably considered the most sacred by nuraghic people: the part occupied by the tomb corridor, that most of the time has been realized during the transition period between the pre-nuraghic and nuraghic ages. Their structure, when the exedra is not present (in this case they’re called “allée couverte”), has a form similar to that of the barrows in Great Britain.

As for the Nuraghi and the Sacred Wells, the Tombs of Giants have been studied in relation to their astronomical orientation. Even in this case there are some surprises: The Tombs of “Li Mezzani” in Palau and “Coddu Vecchiu” are just an example of how neuragic people had a great knowledge of the celestial cycles. On the equinoxes days, in these two Tombs of Giants, the sunrise’s light enters perfectly in the tomb corridor, through the small opening.

To visit a site with more Information and detail on Sardinia and the Nuraghis, click here.