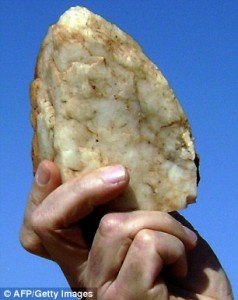 Archaeologists have discovered a set of tools they believe prove that man sailed the sea tens of thousands of years earlier than previously thought.

Rough axes and other tools thought to be between 130,000 and 700,000 years old were found close to shelters on the south coast of the Mediterranean island of Crete.

Crete has been separated from the mainland of Greece for about five million years, so whoever made the tools must have travelled there by sea, a distance of at least 40 miles.

The findings upset the current view that human ancestors migrated to Europe from Africa by land alone.