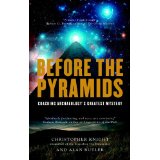 In their book ‘Before The Pyramids’, Christopher Knight and Alan Butler refer to the work of Alexander Thom who proposed the idea of there being a megalithic yard used consistently in Neolithic times in megalithic buildings, which they support and argue the case for. They researched henges going back to a period of 3,500 BC  where measurements of circumference and diameter provide figures that confer the existence of the units used by megalithic builders. It was easily apparent from reading this material that these ancient people would have observed the passing of 366 days as the earth rotated around the sun. (365.25 but round to a choice of convenient figure) The henges were most probably built and used in conjunction with this observation, and it would have made similar sense to have marked out the henge, a circle, in 366 stages, or degrees.

It then seemed logical to follow that a circle historically ought to have had 366 divisions, not 360 as it does now and as it apparently did even since the Sumerian and ancient Egyptian civilisations.