In a Kindle edition book, The Ancient Human Conspiracy, J.D.Gray compiles a list of instances in the chapter on ancient history where it appears as if humans existed on the earth long before traditional views of history would think it possible, at a time when dinosaurs existed.

Among the examples that Gray cites are Wolverine Creek and Tumbler Ridge in Canada, an area noted for dinosaur tracks. However, more sobering information is available on the website Creation.com which states “Human-like footprints were recently discovered in the area, too, but on closer examination they seem to be metatarsal dinosaur footprints.” 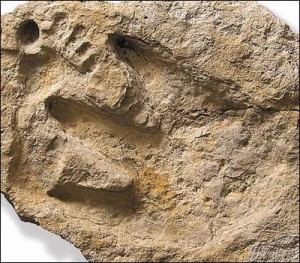 Gray goes on to show in his work an interesting image that appears to be of cretaceous limestone rock from the Paluxy River in Texas in which both a human foot print and dinosaur foot print co-exist. He writes that since 1982 more than 100 fossil footprints and one hand print have been excavated from underneath tons of rock which dates back approximately 108 millions. years. The find is well documented in a number of websites and here is one such site which summarises  in detail this very area, its geology and archeology in the contexts of this particular image and what it is claimed that the image portrays. The author of the page comes to a very different interpretation  to that which Gray leaves us with. The site is http://www.paleo.cc/paluxy/delk.htm. It provides a good, detailed and informative read on the subject, I recommend it to readers. It transpires that the rock sample was found loose and it is without any in situ documentation that would confirm the exact location of the original track bed. Apparently other false carvings have been created and the site gives other circumstantial information to suggest the likelihood that its provenance is to be doubted.

The site conclude  “The Alvis Delk Print is not a convincing human footprint in ancient rock. Its advocates have failed to present the necessary data and details to adequately support their assertions. Even putting aside the extensive independent evidence that humans did not exist until long after the Cretaceous Period, the collective weight of several lines of evidence, including the uncertain circumstances of the discovery, lack of in situ documentation, the knowledge that similar tracks have been carved in the Glen Rose area, the serious morphological abnormalities in the prints, and the considerations about potentially misleading scanning artifacts such as beam hardening, point to the strong likelihood that both the “human footprint” and dinosaur track on this loose slab were carved or heavily altered from less distinct depressions.”

Turkmen Republic is in West Asia. It borders with republics of Kazakhstan and Uzbekistan, in the South and South-East it borders with Islamic republics of Iran and Afghanistan, and on the west side it is surrounded by Caspian Sea.)

Until 2007, the only track photograph I was able to locate in connection with this site that is even remotely humanlike in shape was shown in an article about the Turkmenistan prints on a website (removed in 2007) by strict creationist Jeff Brenner (Brenner, 2006). The article did not indicate the source of the photo, or even clarify whether it is from the Turkmenistan site. The photo did not show a clear human track, but rather an elongate depression with what appears to be significant anterior splaying and more of a three-toed than 5-toed human pattern at the front. There is no discernible ball-arch-heel pattern on the print bottom, and overall, it appears at least as compatible with a metatarsal dinosaur print as a human print. Unfortunately, if it is the former, the far anterior end which might show more indications of a dinosaurian digit pattern is probably cut out of the picture…..

In view of the fact that elongate dinosaur tracks and other non-human phenomena that have been mistaken for human footprints in the past, (Kuban, 1986), and the lack of rigorous documentation by the human track advocates, Golovin’s suggestion that the those who do not accept the human track claims suffer from “evolutionary indoctrination” rings hollow. Likewise, when Benner suggests that the human track claims seem convincing simply because evolutionists have not disproved them, he seems to misunderstand the nature of science. When extraordinary claims are made, the burden is on the claimants to back them up. Without rigorous documentation of the alleged human tracks, what does Benner expect the scientists to address? They’ve described and documented the dinosaur tracks, and so far the humanoid track proponents have presented no substantial evidence that human or even very human-like tracks occur at the site. Indeed, even major creationists groups have refrained from endorsing the claims. For example, “Answers in Genesis” tempered Golovin’s remarks by noting that “one needs to be cautious about accepting the prints described on the basis of just this report. None of our sources has been able to obtain any further information on the prints, nor any photographs to this date.” (AIG website, 2006)….Alleged human or human-like prints alongside dinosaur tracks in Turkmenistan have not been rigorously described or documented. In view of this, and the extensive evidence that millions of years separate non-avian dinosaurs from humans, the tracks in question cannot be regarded as reliable or even probable human prints

Another print discussed in the book is that dating back to 290 million years ago and found by paleontologist Jerry MacDonald in New Mexico. 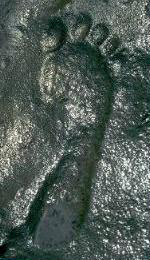 The print is cast in Permian strata in which it is said the fossils of animals and birds were found, even though this would have been long before they, dinosaurs and man were supposed to have existed. Apparently the Smithsonian acknowledges that the prints exist, but I guess they are not referring specifically to the alleged human footprint. (Actually the article which the Smithsonian magazine published in July 1992 about Jerry MacDonald’s finds does not acknowledge the ‘human’ footprint that Gray is referring to, just the animal and bird prints.) A transcript of that article in the Smithsonian magazine can be found here Petrified Footprints: A Puzzling Parade of Permian Beasts”, Smithsonian, July 1992  There does not appear to be any accounts of scientific, investigative research following up with any interest in MacDonald’s find. There are, however, the usual scores of of websites that perpetuate interest in the wake of these finds or inclusions into the fray of archeology and alternative histories, all without anything further to say in the form of research and conclusion. The print looks realistic to a lay person like myself, but I too would have nothing further to say without seeing it in situ. So without science taken up the investigation, we have to trust that the image presented of the footprint is genuine. I wonder why Photographs are not seen that show the print in situ? I wonder also what information or comment about the print would the Smithsonian Institute like to state, or Jerry MacDonald himself? If that comment does exist, would someone point me to it please? Meanwhile, the sites visited while following up of J D. Grays book are found to remark “the silence is deafening.” So on this account of a possible human footprint from an ancient pre-historic past, Gray’s book is helpful in at least pointing interest to it.

Gray next refers to an article published by the National Geographic News in February 2009 of footprints officially recognised as human. They are dated to 1.5 million years ago and are seen to have the same characteriestics as that of modern humans. The article states “The prints are the oldest known to show modern foot anatomy….The discovery also helps round out the picture of a cooling and drying episode in Africa that compelled tree-dwelling human ancestors to venture into the open landscape for food, said John Harris, a paleoanthropologist at Rutgers University in New Brunswick, New Jersey. The ancient footprints indicate a rounded heel, pronounced arch, and a big toe parallel to the other toes just as modern humans have, Harris noted….The rare prints were found embedded in what was once muddy soil among tracks of ancient birds, lions, antelopes, and other critters. Harris said the print makers were likely walking to or from a watering hole. The size and spacing of the footprints indicate they were made by people with bodies similar to modern humans. Given their age, the prints were most likely made by Homo erectus, the first human ancestor to sport long legs and short arms, Harris said. At the time H. erectus emerged, about 1.5 to 1.7 million years ago, global climate was cooling and the African landscape was changing from tropical forest to open savanna. Food sources—nuts, fruits, vegetables, and animals—were becoming more dispersed.”