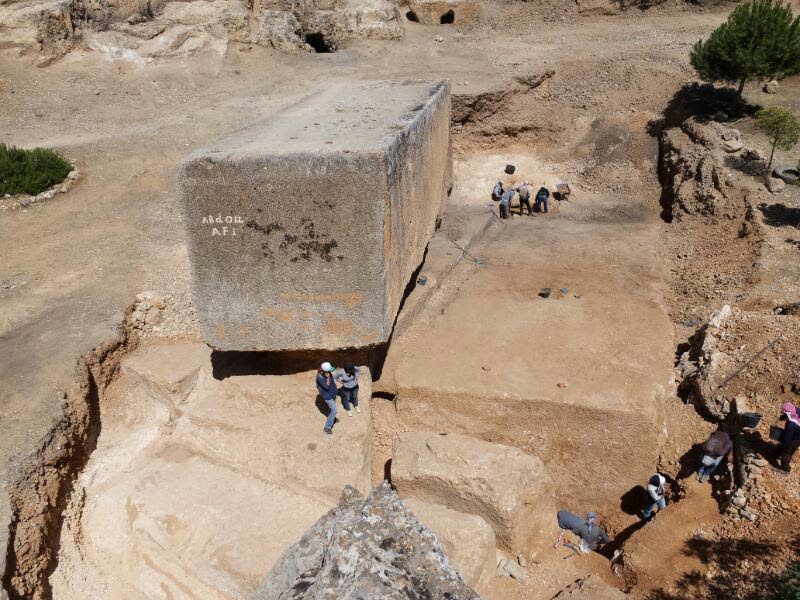 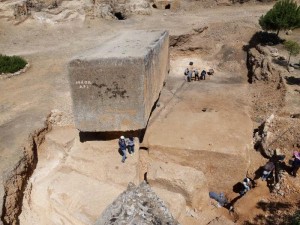 In the summer of 2014 the Oriental Department of the German Archaeological Institute conducted excavations in the stone quarry of Baalbek /Ancient Heliopolis, in Lebanon. There lies the monolith “Hajjar al-Hibla” (Stone of the Pregnant Woman). Similar stone blocks of a 20m-length were used for the podium of the huge Temple of Jupiter in the Roman sanctuary of Baalbek.

The largest ancient stone block, found in Baalbek/Lebanon, at an altitude of approximately 1,170 meters

The aim of this year’s excavations was to find new data about the mining techniques and the transporting of the megaliths. Archaeologists documented processing traces and investigated the old dumps of the mining activities, in order to locate datable and stratifiable sherds of pottery and small finds.

Archaeologists found out that the monolith “Hajjar al-Hibla” was left in the quarry, because the stone quality of a block’s edge proved to be poor and the monolith could easily be damaged during its transport.

Below the “Hajjar al-Hibla” and directly beside of it, there is another megalithic stone block, even bigger than the first one: it measures ca. 19,60x6x5,5m. In order to determine the exact height, the trenches should be extended in one of the next archaeological expeditions at the site. The second block weighs 1,650 tons. Archaeologists concluded that the block was meant to be transported without being cut. This means, that it is the biggest known ancient stone block.