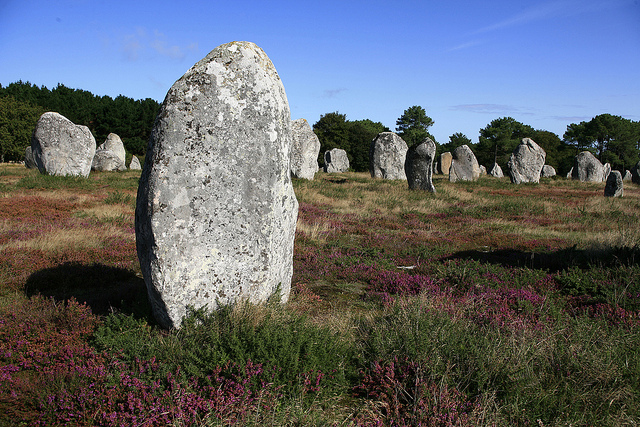 When looking for an introduction to Carnac and its its Megalithic site for inclusion in the content of Quantum Gaze, this article by Mark Cartwright serves very well. Reproduced here under the following license: Creative Commons: Attribution-NonCommercial-ShareAlike 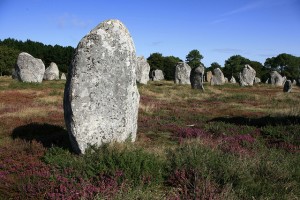 Carnac, located on the north-west coast of France, is the site of the largest concentration of megalithic monuments in the world. Over 100 monuments, which include burial mounds, stone tombs, enclosures, and linear arrangements of menhirs, were erected between the 5th and 3rd millennia BCE by the Neolithic farming communities which inhabited the area of Carnac.

The granite stones (megaliths), varying in size from 1 metre in height to huge 6.5 metre tall stones weighing several hundred tons, were removed (not quarried) from rocky outcrops in the surrounding area. The stones were most probably moved using levers and rollers and those stones positioned on top of others were dragged up an artificial earth incline made level with the top of the vertical stones with the earth then being removed when the construction was complete. The stones were placed in several types of arrangements:

St. Michael’s Barrow, measuring 125 x 60 metres and 12 metres high, is the largest burial mound at the site. Its name derives from the chapel built in modern times on its summit. Excavations within the inner burial chamber placed 8 metres down have revealed many artefacts now in the museum of Prehistory in Vannes. These include shell pendants, beads, more than 40 axe-heads of either green jadeite or white fibrolite, and 97 pearls. Secondary and more comprehensive excavations revealed a small dolmen at the west end of the mound and a larger tomb in the centre which was itself surrounded by 15 irregular graves containing cattle bones. Carbon dating places the construction of the barrow as early as 6,000 BCE.

The Kerlescan Mound has a 3.7 metre high marker stone on top, a common feature of such structures. Finds within the mound date to 2,200 BCE and include pottery and a copper axe. The Er Mané Barrow takes an unusual oval form and measures 35 x 23 metres and stands 12 metres above the surrounding area. Once again a menhir has been placed on the top, this one measuring 2.8 metres high. Yet another example of the barrow form is the Le Manio Barrow which measures 37 x 10 metres and is topped by a massive 6.5 metre menhir known as the Manio Giant. The large stones within the structure display serpent-like carvings.

Of the 50-plus dolmen scattered around Carnac the most celebrated is the Crucuno Dolmen with its classic arrangement of a circle of giant stones topped by a massive 40-ton stone slab. The dolmen’s burial chamber measures 3.5 metres across and is 1.8 metres high. Originally, there was also a 24 metre long entrance corridor composed of standing stones but these, like so many of Carnac’s structures, were plundered so that the stones could be re-used in modern buildings.

One of the few dolmen with its original earth mound above and still with a 6.5 metre long stretch of its entrance tunnel is the dolmen near the Kermario section of the alignments which was built c. 4,600-4,700 BCE. Measuring 25 metres in diameter and standing 5 metres tall the structure once had an impressive ring of stones around the entire circumference but only those stones on the south-west side survive. The stone slabs within the structure were carved to show geometric and axe head designs. One large stone in the inner chamber takes the form of a shield which is a feature of dolmen throughout the region and considered to represent a mother-earth goddess. Artefacts excavated from within include pottery, axes, beads and flint arrowheads, many dating to c. 2,000 BCE and illustrating that the structure was used over millennia.

Perhaps the best dolmen without its barrow is the one situated at the confines of the Kermario alignments. Measuring 8.7 metres in length, four of the stone slabs of the roof remain along with a short section of the entrance passage. Examples of dolmen which contain inner compartmentalised chambers are the Keriaval Dolmen which actually has two lateral chambers, at Mané Groh with its four inner chambers, and the rectangular Clud-er-Yer Dolmen. Finally, the several dolmens near the Kerlescan alignments are good examples of less common burial chambers with a secondary side entrance.

The long parallel rows and semi-circular arrangements of large upright menhirs which stretch 15 km across the fields of Carnac are known simply as the Alignments. The thousands of stones have suffered all manner of interference over the years. Some have been moved by farmers to avoid archaeologists interfering in their livelihood, many have been stolen, roads and car parks have been constructed through them, over 50 were used to build a lighthouse and not a few have fallen on their sides. Still, enough survive to create an impressive panorama of a pre-meditated scheme of placement. The most complete group is at Le Menec where there are eleven rows of stones, each stone decreasing in size moving towards the east and terminating at each end in a large stone circle. The circle at the western end was originally constructed using around 70 stones. The best surviving enclosure, though, is with the Kerlescan alignment section where there is a 240 x 200 metre space surrounded by large upright stones placed very close together. Excavations within the alignments have revealed finds of pottery, flints and hearths.

The exact significance of the stones, especially the alignments, has been much debated for centuries. Local people long-regarded the megaliths as magical, Boureau Deslandes thought that they had occurred naturally following ‘upheavals suffered by the Earth’, and the writer Gustave Flaubert famously dismissed them as merely ‘large stones’. Early scholars considered them examples of Celtic temples or assembly points for the ancient druids of Armorica or even maps of celestial bodies. One of the most picturesque theories, according to the legend of St. Cornely, was that the huge stones were a transformed army of Roman legionaries who had unwisely tried to attack the Saint.

More scientific investigation began in the 19th century CE with the Scotsman J.Miln who studied the megaliths and opened a museum of Prehistory in the small town of Carnac. Miln’s work was continued by his student Zacharie Le Rouzic who also ensured the stones were protected for future generations. Their work, and that of those who followed, has shed a little more light on the secrets of Carnac.

That the larger structures are examples of ancient burial architecture seems certain but these buildings may have also served as territorial markers. The structures could also have had a secondary purpose as a symbol and reinforcement of a group identity. The single free-standing stones of the alignments are much more mysterious but scholarly consensus defines them as most probably markers pointing to or highlighting the presence of a sacred site or significant burial place. The parallel lines of stones seem to define paths which converge towards certain enclosures which are themselves situated on higher ground. It has also been noted that the lines, stretching from east to west, follow the sunrise at the solstices. Therefore, taken together – the lines and enclosures – the entire area covered by seemingly haphazard stones becomes a purposely constructed layout of processional ways and sacred spaces, a pattern reproduced by many subsequent ancient civilizations for their sacred rites from the Minoans on Crete to the Nazca in South America. 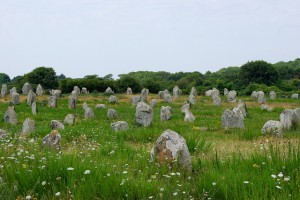 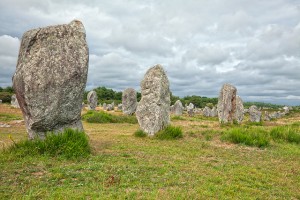 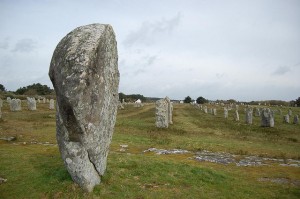 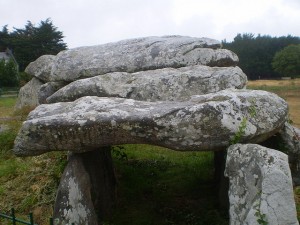