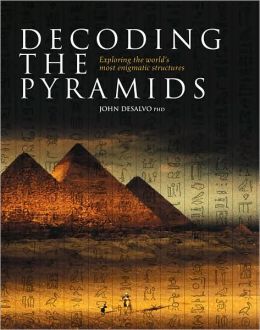 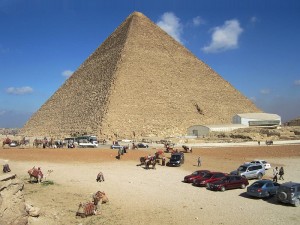 John Desalvo, in his book ‘Decoding the Pyramids’, has brought together a number of aspects of research found sporadically in work by others authors (pages 42 – 43), and which indicate that the Great Pyramid may have some additional chambers as yet undiscovered. Notes from the books are as follows –

“in 1996 two Frenchmen (Gilles Dormion and Jean Patrice Goidin,) used electronic detectors …..They found that below the passageway leading to the Queen’s chamber was another chamber 9ft X 15ft………In 1987, Japanese researchers from Weseda University claimed to have found a cavity about 4 3/4ft under the horizontal passage to the Queen’s Chamber and extending almost 9ft using X-rays. They also identified a cavity behind the western part of the northern wall of the Queen’s chamber.”

“In 1988 another Japanese team identified a cavity off the Horizontal Passage. A large cavity was also detected behind the north-west wall of the Queen’s chamber”

On page 40, John Desalvo writes of Dr. Louis Alvariz (who won the Nobel prize in physics) who in 1968, in conjunction with Dr Ahmed Fahkry, an Egyptologist, used cosmic ray probes developed by Dr. Alvariz, in the Chamber of Chephren’s pyramid. The oscilloscope showed a chaotic pattern indicating that something strange was going on. The data was run several times but each time different results occurred. No hidden chambers were found but interpreting the results remained inclusive.

As examples of non-intrusive scientific exploration into the Great Pyramid, among others, it seems incorrect that such investigations that can build upon these findings should not be allowed to continue further or as often as they might. 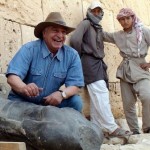 I wonder why it is that Zahi Hawass, who is clearly very passionate about Egypt and its history, and is the Director of the Giza Plateau, seems to singularly hold so much power upon any decisions to study the pyramids and other monuments when so often I come across writers who report that scientifically respectful and beneficial investigations to bring about further knowledge about the pyramids has not been permitted?