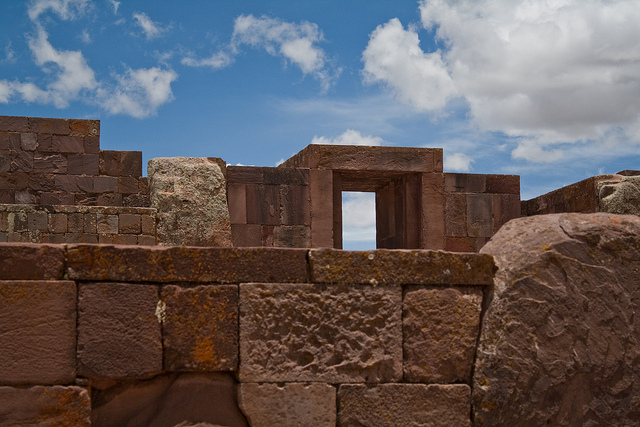 Puma Punku is situated at an altitude of 12,800 above sea level and is part of complex of structures at Tiwanaku (Spanish: Tiahuanaco or Tiahuanacu) which is a Pre-Columbian archaeological site in western Bolivia, South America.

It is thought to have begun as a village around 1500BC and to have flourished between 300 to 1000 AD as the capital of an empire that extended into present-day Peru and Chile. Its ruins are near the southeastern of Lake Titicaca. 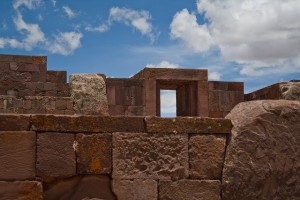 Pumpunku, meaning “The Door of the Puma”. Current understanding of this complex is limited due to its age, the lack of a written record, the current deteriorated state of the structures due to treasure hunting, looting, stone mining for building stone and railroad ballast, and natural weathering. Excavations have documented three major building epochs, in addition to small repairs and remodelling. 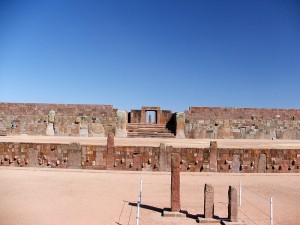 The monumental stone architecture is of exceptional workmanship. At Pumapunku, the most prominent feature is a man-made rectangular, terraced platform, 6.75 by 38.72 meters, built on an east-west axis and faced with megalithic blocks. Its architecture comprises rectangular ashlar blocks laid in regular courses. The largest stone block of red sandstone found in the Tiwanaku site is estimated to weigh 131 metric tons.and the second largest stone, within Pumapunka is estimated to be 85 metric tons. The other stonework and facing of the Pumapunku consists of a mixture of andesite and red sandstone. The core of the Pumapunku consists of clay. The fill underlying selected parts of the edge of the Pumapunku consists of river sand and cobbles instead of clay. 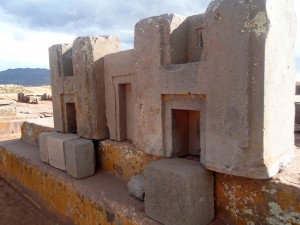 The quarries that supplied the stone blocks for Tiwanaku lie at significant distances from this site. The red sandstone has been determined by petrographic analysis to come from a quarry 10 kilometres away. The green andesite stones that were used to create the most elaborate carvings and monoliths originate from the Copacabana peninsula, located across Lake Titicaca. Several theories have been proposed as to how this labor force transported the stones although these ideas remain speculative. Theories involve the use of llama skin ropes, the use of ramps and that the the giant andesite stones, weighing over 40 tons, were transported some 90 kilometres across Lake Titicaca on reed boats, then laboriously dragged another 10 kilometres to the city. Such paved structures at Tiwanaku frequently included elaborate drainage systems involving conduits composed of red sandstone blocks held together by I shaped cramps. The I-shaped cramps of the nearby Akapana were created by the cold hammering of ingots made from copper-arsenic-nickel bronze alloy while in contrast at Pumapunku were created by pouring molten a unique copper-arsenic-nickel bronze alloy metal into the I-shaped sockets. 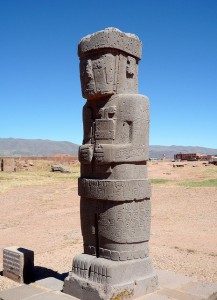 The stone for the the walls of Pumpunku was finely cut to interlock with the surrounding stones and the blocks fit together like a puzzle, forming load-bearing joints. Such precision with which the stone has been prepared to create flush joints without mortar and whereby not even a razor blade will fit between them, is indicative of a highly sophisticated knowledge of stone-cutting. This suggests the possibility of prefabrication, technologies far in advance of their Inca successors hundreds of years later. There are stones cut with perfect right angles and the surfaces extremely smooth.

Ground-penetrating radar, magnetometry, induced electrical conductivity, and magnetic susceptibility surveys between the Pumapunku and Kalasasaya complexes have revealed the presence of numerous man-made structures. These include the wall foundations of buildings and compounds, water conduits, pool-like features, revetments, terraces, residential compounds, and widespread gravel pavements all of which now lie buried and hidden beneath the modern ground’s surface. Engineers at Tiwanku in those ancient times were adept at developing a civic infrastructure, constructing functional irrigation systems, hydraulic mechanisms, and waterproof sewage lines.

One of the most important archaeological artifacts ever discovered in the area is the famous Fuente Magna Bowl. This has Sumerian cuneiform and Proto-Sumerian hieroglyphic written on it. The Italian professor Alberto Marini reckoned that, according to his translation, the signs on the bowl was Sumerian cuneiform. Another professor, Clyde Winters thinks the signs are ‘proto-saharian’ cuneiform in use 5000 years ago! 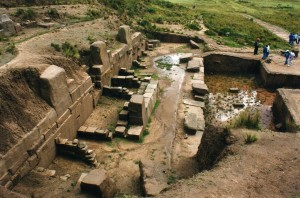 Examinations of hair samples found remnants from hallucinogenic plants found in Tiwanaku culture mummies from Northern Chile, even those of babies as young as one year of age, perhaps demonstrating the importance of these psychoactive substances to the Tiwanaku.

Within the site of Tiwanaku are many impressive gateways which show iconography mostly so on the Gateway of the Sun. 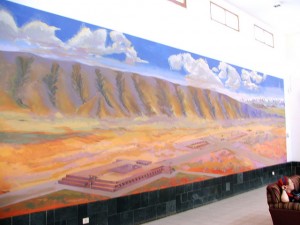