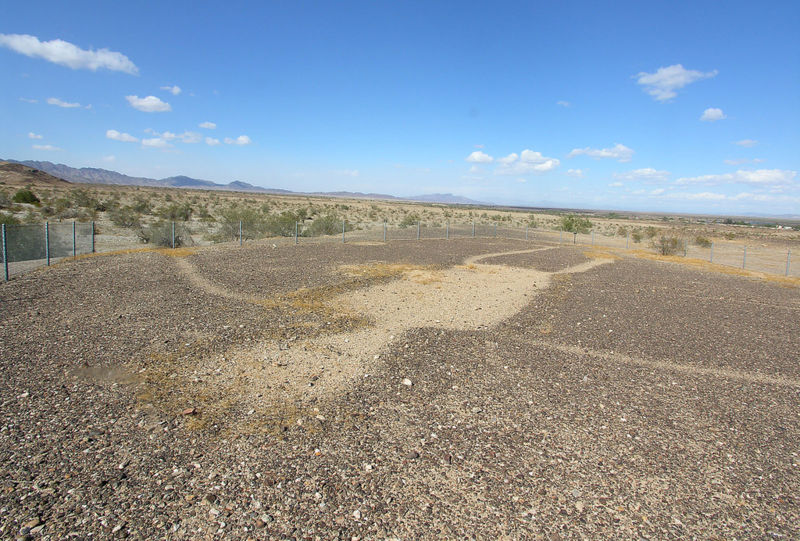 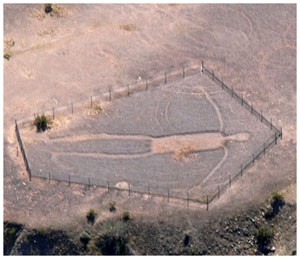 An article from the Blythe Area Chamber of Commerce:

Are Giant Figures, known to archeologists as Intaglios, pronounced “In-tal-yos”, an Italian term which refers to an engraving art process, are located 15 miles North of Blythe on Highway 95.

They’re one of the few unsolved mysteries of modern archeology -pieces of history preserved in the desert on a mesa of the Big Maria Mountains north of Blythe. And most recently, they have been added to the National Register of Historic Places.

Scientifically, they bear the name anthropomorphic geoglyphics. They have been more commonly called the Blythe Giants and are better known to locals as the Intaglios. But the origin of the giant desert figures now protected behind chain-link fences remains a mystery to visitors and scientists alike.

The geoglyphics vary in form, style and size with the largest figure in the Blythe area, a man over 165 feet long, thought to be a giant hunter, being constructed like the other figures in the area through the removal of a surface layer of darkened rock, exposing a lighter soil underneath.

The Intaglio sites are generally located along the Colorado River flood plain, but also found in San Bernardino and Imperial Counties. Many specific locations are not identified to discourage vandalism, a problem that slowly threatened the Blythe figurines until the federal Bureau of Land Management (BLM) constructed a chain-link fence around three of the major figures north of Blythe.

The figures were fashioned by Indians possibly thousands of years ago, but their cultural significance is uncertain. Various Indians such as the Mohaves, Aims, Halchidomas, Quechans and Maricopas inhabited the area, but no concrete evidence linking the figures to any particular group has been discovered, even after recent investigations by archaeologists from the National Register and Native American Heritage Commission.

A variety of theories surround the origin and significance of the giant desert figures, which are best seen by air, and were first discovered in 1930 by pilot George Palmer, who reported seeing a giant horse’s tracks leading from the Colorado River to the mountains where the figures are located. Theories include religious lore and cultural expressions from the Indians, territorial markers or astronomical graphics. But one author uses the giant figures, found nowhere else on the continent, as evidence for his theory that primitive man was at one time visited by highly intelligent beings from outer space. Eric Von Danagen, in his A Chariot of the Gods and the movies that followed its release during the early 1970’s, theorized that man was visited while the planet was relatively young and homo-sapiens were primitive.

He claims that the giant desert figures can be seen only from the air where the original calculations for the proportioned geoglyphics were made and given to the Indians below who followed the instructions in carving out the figures, scraping as deep as six inches into the rocky desert floor. He added that the figures can be seen from the ground, but make sense only when viewed from the air, and were possibly some sort of landing guide for the extraterrestrial visitors.

Most Intaglios were made by scraping the darkened rock on the desert floor to reveal a tan- colored soil beneath and have weathered thousands of years of rain, wind, scorching desert sun, and most recently, off-road vehicles. The longest figure in the Blythe Intaglios is nearly 167 feet long and the only other similar figures in the desert have been found at Nazca, Peru, also mentioned in Von Danagen’s book.

Only recently the giant desert figures, a favorite visiting spot for winter visitors and travelers on US 95, have been named to the National Register of Historic Places in Washington D.C., after a lengthy qualification process which began in 1978.

The nomination of the figures represented a digression from tradition in that most places on the National Register are building, are whose locations are fairly well known. Experts on the survey concluded that some of the figures may be Prehistoric, while others were done after the Spanish introduced the horse to the area. 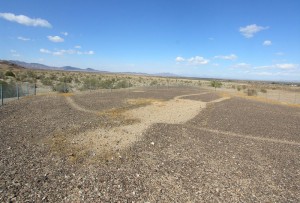 A portion of the land where the figures are located is privately owned, but the figures north of Blythe are on BLM land and fall under Federal Protection. Visitors will find a graded dirt road that winds up to the top of the mesa and two fenced areas containing two of the Giant Drawings, a man and four-legged animal with what appears to be a snake at its feet.

While most visitors agree the figures are probably more striking when viewed from the air, they also feel they are privileged to view a part of history that still remains etched in the desert floor forever.

via and quoted from ‘Blythe Area Chamber of Commerce’ Intaglios.

Lower image: One of the Blythe Intaglios, prehistoric geoglyphs in the Mojave Desert, near Blythe, California. By Ron’s Log (http://www.flickr.com/photos/ronslog/400353265/) CC-BY-SA-3.0