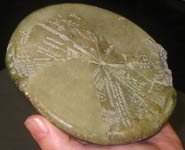 A cuneiform clay tablet that has puzzled scholars for over 150 years has been translated for the first time.

The tablet is now known to be a contemporary Sumerian observation of an asteroid impact at Köfels, Austria and is published in a new book, A Sumerian Observation of the Köfels’ Impact Event.

The giant landslide centred at Köfels in Austria is 500m thick and five kilometres in diameter and has long been a mystery since geologists first looked at it in the 19th century. The conclusion drawn by research in the middle 20th century was that it must be due to a very large meteor impact because of the evidence of crushing pressures and explosions. But this view lost favour as a much better understanding of impact sites developed in the late 20th century. In the case of Köfels there is no crater, so to modern eyes it does not look as an impact site should look. However, the evidence that puzzled the earlier researchers remains unexplained by the view that it is just another landslide.

This new research by Alan Bond, Managing Director of Reaction Engines Ltd and Mark Hempsell, Senior Lecturer in Astronautics at Bristol University, brings the impact theory back into play. It centres on another 19th century mystery, a Cuneiform tablet in the British Museum collection No K8538 (known as “the Planisphere”). It was found by Henry Layard in the remains of the library in the Royal Place at Nineveh, and was made by an Assyrian scribe around 700 BC. It is an astronomical work as it has drawings of constellations on it and the text has known constellation names. It has attracted a lot of attention but in over a hundred years nobody has come up with a convincing explanation as to what it is.

With modern computer programmes that can simulate trajectories and reconstruct the night sky thousands of years ago the researchers have established what the Planisphere tablet refers to. It is a copy of the night notebook of a Sumerian astronomer as he records the events in the sky before dawn on the 29 June 3123 BC (Julian calendar). Half the tablet records planet positions and cloud cover, the same as any other night, but the other half of the tablet records an object large enough for its shape to be noted even though it is still in space. The astronomers made an accurate note of its trajectory relative to the stars, which to an error better than one degree is consistent with an impact at Köfels.