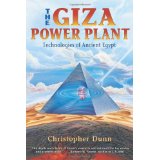 In his capacity as an engineer, Chris Dunn, in his book, ‘The Giza Power Plant’, wrote some very interesting ideas about the Great Pyramid. Unfortunately, toward the end of the book he write some very, very silly stuff in my view when he said something, as I recall, about the pyramid emitting a ray and aliens! It was as though he had no idea how to finish such a book and wrote something extraordinary so as to pitch it presumably at a particular chosen market niche and audience to suit a publisher. (I’m guessing). That was unfortunate, I think, and obviously likely to diminished regard for anything he may have had to say based on his observations and knowledge. Never mind, there still might be something in what he has to say as an engineer in the earlier part of the book.

Of interest here is his interpretation of what was found when shafts inside the pyramid were explored. He believes the findings gave evidence of electrical terminals, supporting his theory that the pyramid was a device, a machine of some kind. He proposed is was one that generated power. It seems unlikely, but some of his observations seem worthy of note.

Some background on the topic and the book can be found here, at the time of writing.