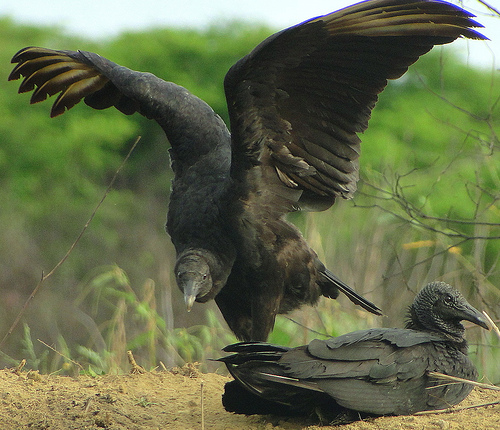 An interesting article by Erin Wayman for Smithonian, pub. September 24, 2012:

Neanderthals have a reputation for being dumb brutes. While modern humans (Homo sapiens) were painting cave murals, sculpting tiny figurines and crafting beaded jewelry some 30,000 to 50,000 years ago, Neanderthals weren’t making any art. At least, that’s the way it appears in the archaeological record. Now, a new study of bird fossils suggests our cousins were indeed capable of expressing themselves symbolically—using feathers as personal adornments.

In the last few years, researchers have reported a few archaeological sites with evidence that Neanderthals removed feathers and claws from birds such as raptors, presumably for ornamental purposes. Clive Finlayson of the Gibraltar Museum and his colleagues wanted to see how widespread this behavior was among Neanderthals. They published their findings last week in PLOS One. 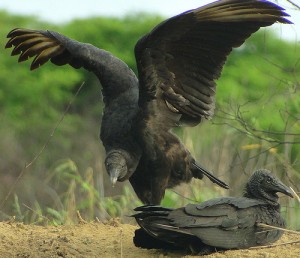 To address the question, the team looked at Neanderthals’ association with fossils of raptors (including vultures and eagles) and corvids (including ravens and magpies). They focused on these birds because modern people generally don’t consume them and therefore Neanderthals probably didn’t either. Thus, finding these types of birds at an archaeological site helps exclude the possibility that our cousins were eating them. In searching almost 1,700 sites across Europe and Asia that contain bird fossils, the team noted that species with dark plumage were more common at Neanderthal sites than would be expected by chance alone. So, it seems Neanderthals across their geographic range liked black birds.

Next, the researchers looked at three cave sites on Gibraltar to examine more closely what Neanderthals might have been doing with these birds. The caves date from 57,000 to 28,000 years ago, before modern humans entered the region. The team found 604 avian skeletal pieces, representing at least 124 individual birds. With less than 3 percent of the bones containing the tooth marks of rodents or carnivores, Neanderthals are the likely reason the birds were brought into the caves.

More than half of the bones were wing bones. There’s no reason to expect wing bones to be disproportionately preserved in the fossil record, so this is another sign that Neanderthals were mainly interested in feathers, the researchers say. Furthermore, most of the bones with stone-tool markings are the wing bones. If Neanderthals were butchering the animals for meat, you’d expect to find the most markings on bones connected to fleshy areas, such as the breast bone.

Because soil bacteria rapidly decompose feathers, the researchers conclude our cousins weren’t using feathers as bedding. The only use that makes sense, Finlayson and colleagues argue, is plucking feathers to make headdresses, cloaks or some other adornment.

“Neanderthals, though different in a number of ways from modern humans, had comparable cognitive capacities that included symbolic expression,” the researchers write. Furthermore, they say, any differences in the art or artifacts left behind by the two species was the result of cultural differences, not intellect.