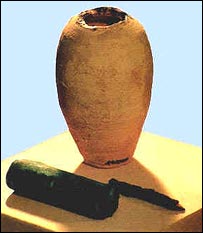 Nobody really knows for sure what the exact age and purpose of these small vases. 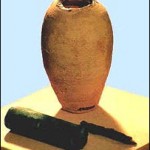 The first claim that they were batteries occurred in 1938. See Baghdad Vases were Batteries?

I came upon the website of an archeologist who refers to herself as ‘ArchyFantasies’. It’s her domain name also. She writes to debunk bad archeology and pseudo-science. Her comment and reflection of the context surrounding the ‘Baghdad Batteries’ caught my attention because I find it quite credible, in a way. She surmises that the vases were used to store scrolls. I like that, its sensible, simple and grounds any sense of mystery. The alternative is to view the clay vases as something quite incredible, which is the impression so often otherwise painted of them, as batteries. Even so, it may yet be difficult to rule out entirely the idea that their purpose was not so straightforward. The choice of  a copper cylinder and a iron bar does remain intriguing and the shape of the vase, or jar, itself is curious if storing a scroll was its intended purpose. It would be a very small scroll housed inside.  The scroll jars housing the dead sea scrolls, for example, were more cylindrical. Perhaps, jars already made for other purposes, wine, vinegar etc., were brought into use to store the small scrolls. And that might explain why early tests revealed that an acidic agent, such as vinegar or wine had been present.