A 2,600-year-old two-handled wine cup currently on display at the Lamia Archaeological Museum in Greece has long been thought to depict a random assortment of animals. 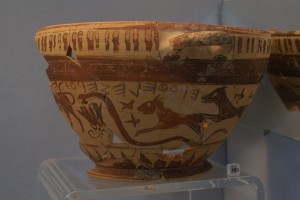 But the piece of ancient pottery, called a skyphos,may actually contain one of the earliest Greek depictions of the constellations, a new analysis shows.

The study researchers suggested that other ancient artistic representations of animals may also portray constellations, and hold clues to what the early Greeks knew about astronomy, said study researcher John Barnes, a classical archaeology doctoral candidate at the University of Missouri. [Image Gallery: World’s Oldest Astrologer’s Board]

“If we go back and re-evaluate other animal scenes that might have been originally categorized as hunting scenes or animal friezes, then maybe we can find more [depictions of constellations] and get a greater understanding of how the ancient Greeks viewed the night sky,” Barnes told Live Science.

Most of what’s known about early Greek astronomy comes from various literary texts, such as Aratus of Soli’s Phaenomena, a poetic text that describes the Greek constellations known by the third century B.C. However, these valuable documents only date as far back as the Classical period of Ancient Greece, which lasted from the fifth to the fourth century B.C.

To learn about how the ancient Greeks viewed the night sky before then, researchers must rely on visual depictions of the sky, such as those found on ceramic pottery — but these artifacts are relatively rare, and what’s left of them generally only show one or two constellations. For example, one of the oldest constellation images from Greece comes from a pottery fragment from the Late Geometric period (760 to 700 B.C) found at a site on the island of Ischia in Italy, but it only depicts what may be the constellation Boötes (“the Herdsman”).

Barnes didn’t set out to find ancient Greek constellation portrayals, but rather stumbled upon the curious skyphos while visiting the Lamia Archaeological Museum. The artifact, which dates back to 625 B.C., was originally discovered in a debris-filled trench next to a temple in the seventh-century acropolis of Halai, which is located about 25 miles (40 kilometers) north of Thebes, Greece.