Skip to content
Loading...
Latest news
Armenian Stonehenge: Incredible History of the 7,500-Year-old Observatory of Zorats Karer
Mysterious Megaliths of the Talaiotic People, Menorca
New Claims About The Great Pyramid – Do They Stand Up? Graham Hancock Website
Curious Stone:- Who Drilled The Holes In This Million Year Old Stone?
10 Controversial Archaeological Discoveries You Should Not Miss – Oddee
Ancient HistoryCurious?Editor's Page 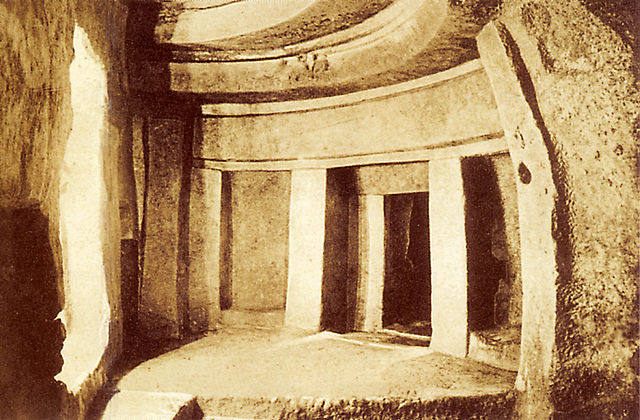 Dates for when the construction of the Hypogeum of Paola in Malta began are varied and vague. I’m gathering that no one actually knows for sure quite when it was built and by who. Texts suggest it dates back to about 2500 BC while other texts push the date back further to 3300 BC which would have been during the Saflieni phase, one of Malta’s eleven phases of prehistory. It is said to be the only known example of a subterranean structure of the Bronze Age, therefore very unique. If, as is stated that it was a temple, then it is the only known prehistoric underground temple in the world. It is thought to have been a sanctuary which then became a necropolis, based on the remains of 7,000 people have been found there.

The Hypogeum is a labyrinth that has three levels comprising elliptical chambers with interconnecting corridors. The walls are constructed in a cyclopean manner from blocks of chalky coralline stone without mortar. The tools used to dress the walls would have been made from flint and obsidian. The principal rooms distinguish themselves by their domed vaulting and by the elaborate structure of false bays inspired by the doorways and windows.

The first level is very similar to tombs found in Xemxija in Malta. Some rooms are natural caves which were later artificially extended.

The second level is ten metres below the surface, roughly circular and carved out from the rock.  There are a number of trilithon entrances, (two large vertical stones (posts) supporting a third stone set horizontally across the top (lintel, typical of megalithic building). Some of these are blind, and others lead to other chambers. Most of the wall surface has received a red wash of ochre. There is a spacious hall decorated with geometric patterns and spirals still visible in places.  On the side wall to one of the entrances is a human hand carved into the rock, a petrosomatoglyph

It was from this 2nd level that figurines of a sleeping lady were recovered which are currently held in the Museum of Archaeology, in Valletta, Malta.

There is a rectangular room, called the oracle room, and this has notable properties. One of the niches in this room has the characteristic of echoing deep sounds. One site comments of this space that “It gets weirder: If you’re a man chanting at roughly the 110 Hz frequency, the entire temple complex turns into this bizarre trance-inducing room that seems able to stimulate the creative center of the human brain” The site does not offer, however, any corroborative references with which to substantiate this or whether it is a actually a case of exaggeration. It certainly seems bizarre, so it’s a wonder. Spirals in red ochre with circular blobs decorate the ceiling.

The second level is described as having a pit 2 metres deep. It is described as a pit used for snakes or for collecting alms. So as with so many things in prehistory, a lot of guess work is clearly going on here. Why would someone think of it as a snake pit I wonder? And on what basis are we able to guess at all in this instance as to the purpose of the pit? 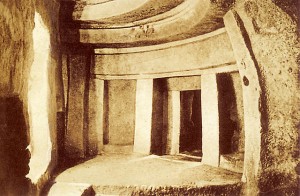 Another space within the Hypogeum is referred to as the Holy of Holies. The focal point this a porthole within a trilithon, or structure consisting of two large vertical stones, which is in turn framed within a larger trilithon and yet another large trilithon. That’s really quite amazing! The corbelled ceiling has been taken as a hint that Malta’s surface temples, now uncovered, could have been roofed similarly.

The third level is thought to have been used for storage, the guess as to what was stored is perhaps water or grain.

The site was uncovered in recent history, 1902 and now a UNESCO world heritage site.