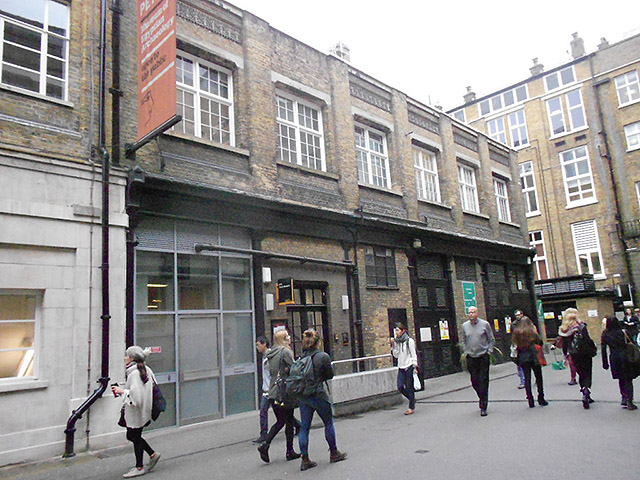 I visited the Petrie Museum in London this week.

One of the first things I found intriguing almost as soon as I entered the Petrie Museum were the hieroglyphs and drawings in stone which were of two distinct types in terms of their artistry and technique. I hadn’t realised this from from any two dimensional images I had seen in books or on screen. Nor I had I yet come across mention of these two distinctly different modes of working the stone when carving into to. One type had the carving cut into the surface of the stone, the other type had removed stone from around the area carved so that the artwork was left raised proud of the stone. This latter technique seemed immensely more difficult to have achieved and required a greater vision on the part of the engraver, it seemed to me, to have worked in this way.

The set squares, described by the museum under the category ‘Furnishings’ were interesting to see because, even though these are from the late middle kingdom, the early recognition and use of the angle of 90 degrees would have represented a significant leap forward in geometry, building and design work that followed.

Vases from as early a period as the 2nd dynasty were interesting and curious to see. I would like to have known more about how the spout would have been soldered to the body of the vase. That seems quite a superb piece of advanced craft work.

The production of Faience, such as used in the rings and amulets is interesting, as is the purpose or meaning precisely of a Djed pillar, which seems to remain unknown.

The wooden cradle was of interest because it has been mentioned before how such cradles as this may have been strapped to each corner of a stone block to roll it. So the idea is that perhaps if the Egyptians did not at the time of building, ‘Temples’, and pyramids, use a wheel, (hard to believe they didn’t), then perhaps four cradles may have formed a workable means of moving heavy items. The museum labels this item cautiously, stating with a question mark how it may be a model of wooden cradle used for raising stone blocks. There is no mention of how the museums see this as actually having been used in any way to have raised, rather than rolled, stone blocks. This is perhaps one of the disappointments of the museum, it has little to say about its artifacts, even when  looking up the objects on the online site. When I wanted to know more about a particular item, a vase amid some clay pots from around the 2500BC period for example, nothing was forthcoming – it was a piece of pottery, but I wanted to know more about how it was made and what it was actually made from – I could not be certain it was a clay pot, and wondered it had possibly been carved from stone. I’m continually amazed, since falling by chance into a casual interest in ancient history, just how little is seemingly known by those who claim expertise in the subject. It seems expertise is mostly a matter of guesswork. It quickly became clear also that there were not any staff to hand who knew anything about archeology and the exhibits. Those present were interns, they said, and their friendly presence seemed merely to greet visitors and keep an eye on things. Apparently a meeting with a more knowledgeable person can be arranged of a Monday morning. I went there on a Wednesday. It is great that this museum and its collection exists and how it is freely open to the public.

Items that caught my attention are shown here. They were selected mostly for their reference to tooling and technology in some way. 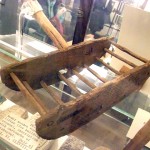 Model wooden cradle for raising stone blocks (?). From foundation deposit in “a small pit covered with a mat” found at Deir el-Bahri 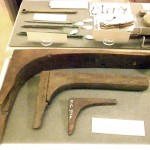 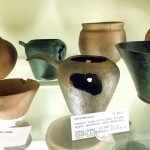 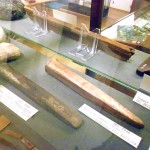 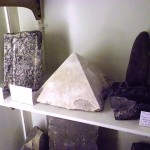 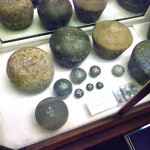 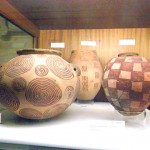 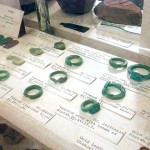 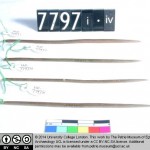 Photos (snaps) other than needles above: Ian Caird